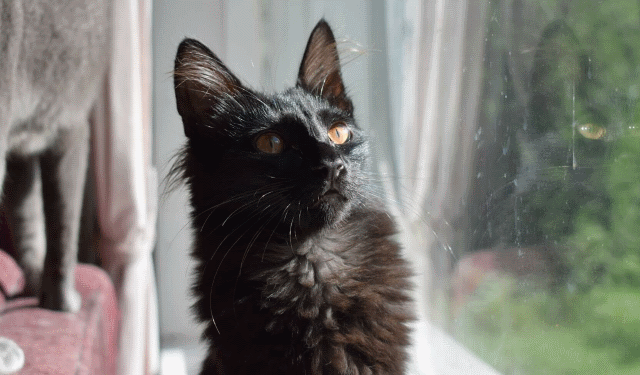 This week's cat of the week is Amir. Amir comes submitted to us by his humans all the way from Finland!! Amir is around 5 months old, he lives in Finland, he is an indoor cat and he is a purebred Turkish Angora. He came to be a part or the Adenium Cattery at 13 weeks old. He is destined to have kittens one day with his (future) girlfriend Safiya. Safiya is the white cat seen above. Amir is very cuddly, but he prefers to cuddle by headbutting your face (preferably nose) so hard it hurts and slowly clawing his way through your stomach. He's definitely a kneader.

So much so that he kneads the air as you can see in the picture above. If you've got a cat with nails like Amir's learn to trim them right here!

He also climbs around his human's head in circles - on her chest, from there to her shoulder, then to the back of her head, to the other shoulder, to the chest again, headbutting her cheek every time he passes it.

He does settle after a while and finally sleeps quietly in her lap, but to say he is energetic is an understatement!

He also prefers to sleep ON his human every night - as close to her face as possible. When possible, he'll even lay down directly on her face. Amir is the goofiest kitten you'll ever, he has a whole arsenal of hilarious habits. He turns his head upside down when he wants to look behind him, turning around is obviously way too easy for him.

He makes the most angry noises when you pick him up JUST when he was doing VERY IMPORTANT KITTEN STUFF (which seems to be all the time). I know whenever I've fostered kittens they love to play with chewy toys all the time. His human says it sounds eerily similar to an upset human toddler. He makes the most hilarious noises while he plays - alone. Amir basically talks to himself. She likes to think in his head it's like when little children talk to themselves when they play.

For example, Amir might be thinking "and then this SCARY HUGE TIGER attacks and the zebra runs and he jumps and oh no it's getting away but the tiger will climb to this tree" and so forth. Whenever a human is walking from room to room Amir just HAS to run beside them - and he always bumps his side into your leg with full speed. His human is half convinced he means to do that, but she has no idea why.

He gives you his signature upset meow if you accidentally kick him when he does this. He certainly sounds like quite the character! We thank Amir's humans for submitting him as cat of the week! To submit your cat for Cat of the Week please send at least 5 photos (feel free to send more!) and a description of at least 400 words to Craig@StuffCatsWant.com.

If you find this useful spread the meows...
About the author