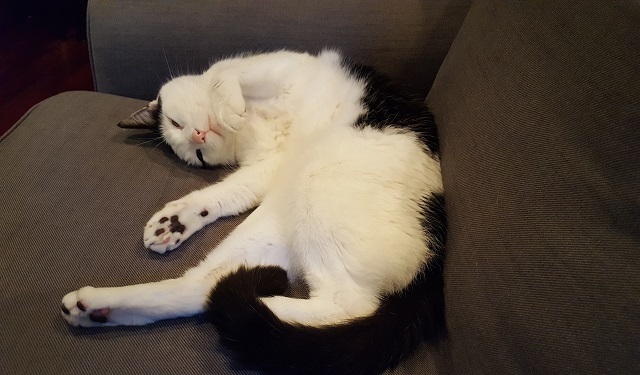 Buzz has been adopted and is living the dream in his new home! Thank you to everyone who shared his information and my post across social media! I really appreciate it and so does Buzz!! 🙂

While I of course do my best to help you take care of your own cats I also volunteer to foster cats on a rather consistent basis in Chicago.  Right now I’m fostering a wonderful domestic short hair named Buzz.  Buzz is a gorgeous cow cat with a bit of a salt and pepper look going on. Buzz has been in and out of the shelter multiple times to foster homes. Buzz absolutely loves foster homes. But our foster program is dedicated to getting the cats ready for a stint in the shelter, very few cats are adopted straight out of homes.  Buzz runs into problems because whenever he heads back to the shelter he reverts into a very scared guy that hides in his room or in the corner of his condo. This means that he doesn’t ‘show well’ and not showing well means it is incredibly hard to get Buzz, or as I am affectionately referring to him. Mr. Buzz, adopted.

Given this I’m writing up this short, but detailed article to help Buzz find a home. I don’t want to send this guy back to the shelter again. Buzz is by far the chilliest and coolest cat I have ever fostered. This is not to say I haven’t thoroughly enjoyed fostering other cats, it is simply to say that Buzz is a wonderful feline.  My wife and I long ago decided that two cats was the cap for permanent residency, there’s only so much room on the bed. That being said, I do have Buzz here for about another 2 weeks.  After these two weeks are up my wife and I go out of town on an extended trip and Buzz will unfortunately go back to the shelter.  Given this I’m doing my best to find this gorgeous boy a home before he heads back to the shelter.

So let me tell you about Buzz. Buzz is about 3 years old and he’s about 13 pounds, he’s not a small cat. That being said, he certainly doesn’t get in the way as much as my tiny little 8 pound cat. Buzz in general loves to get nearby and then chill out, he doesn’t tend to walk on top of your laptop or your keyboard to get attention. He’s a happy dude so long as he’s nearby a human.

Let’s Get a Look At Him!

I’ve posted a number of pictures of Buzz as well as this short video showing Buzz in action getting tummy rubs and drinking some water in his own unique way:

A Collage of Buzz Pictures!

So this is a humble request, from one cat person to another, to please go ahead and share this post with your friends in the Chicago area. If you have friends who like cats or who might be interested in adopting a cat they should definitely consider Mr. Buzz. He’s a champion of a cat, he’s super low maintenance, and he’s the chilliest feline I’ve encountered in a long long time!

Note that if you’re interested in adopting Buzz or if you have any questions about him please contact me @ Craig@StuffCatsWant.com.

Please keep in mind Buzz is not my cat. He will need to be adopted through Chicago PAWS. Here is his profile on the PAWS Website. I can easily tell you how to go about this though if you’re interested!