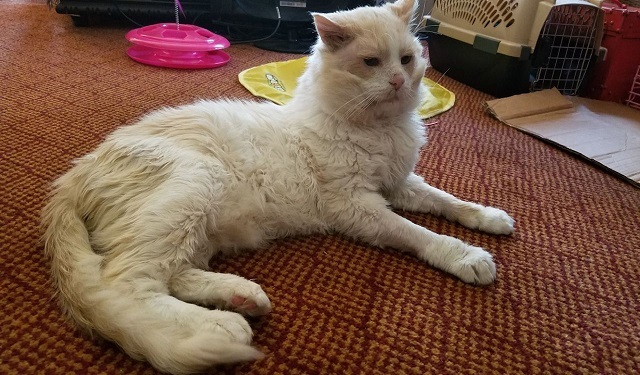 This week’s cat of the week comes submitted to us from Wayne Walker and his Cat’s name is Pablo! 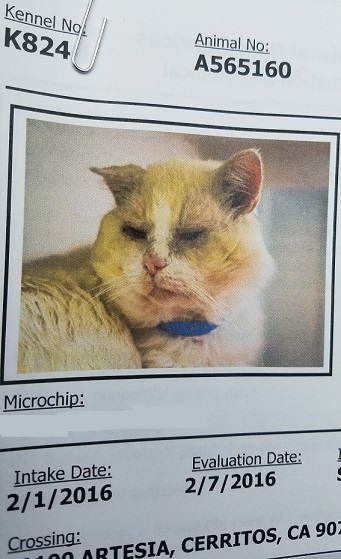 Wayne met Pablo two years ago when he was a Rescue Partner volunteer for the City of Long Beach Animal Care Services. Pablo was frightened and malnourished, and his fur was dirty and matted.

Even worse, he required multiple surgeries to remove ingrown eyelashes, which had become infected and left him barely able to see, so he had been having a pretty hard time on the streets.

Pablo’s lower eyelids had to be permanently removed in multiple procedures. This caused his face to swell up quite a bit, to the point that he was practically blind. It was also very psychologically stressful for him, so all of the people at the shelter did our best to give him as much TLC as we could. 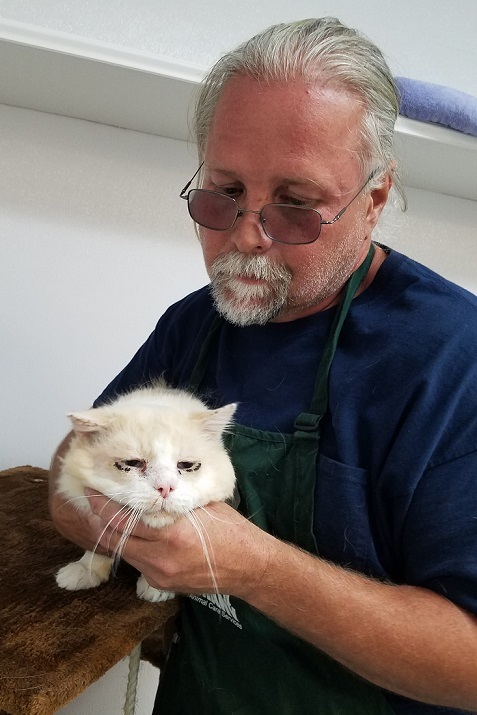 Wayne still remembers when Pablo had just been put back into his kennel after a procedure. He opened the kennel door to check on Pablo, but Pablo turned towards him and swiped out of fear.

Pablo’s face was so swollen that he couldn’t see, so he was very frightened. He backed off into a corner of his kennel and turned his face away from Wayne in a submissive gesture as if to say “Please don’t hurt me!”

Wayne considers himself a fairly hard-nosed guy in most circumstances. He’s a veteran and warehouse manager and had a pretty rough upbringing. But seeing Pablo in such distress and pain was very difficult. Wayne had to step outside for a few minutes to get himself under control before returning to Pablo’s kennel. 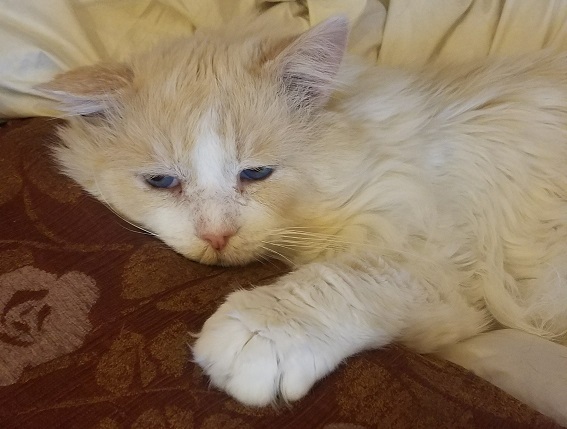 This time, as Pablo usually would, he quickly came to Wayne. He couldn’t see Wayne, but he knew the sound of his voice. Wayne gently stroked his neck and back, and Pablo began to relax.

Wayne stayed with him until he was calm enough to go to sleep. Wayne still considers that the toughest day he’s had as a volunteer.

While the shelter staff and veterinary team had done all they could for him, Pablo’s psychological and physical health began to deteriorate. Eventually, Wayne agreed to foster Pablo to give him a better environment.

This was despite already having a rescue cat and being on a limited income. Wayne and LBACS worked with Stray Cat Alliance to setup the foster. 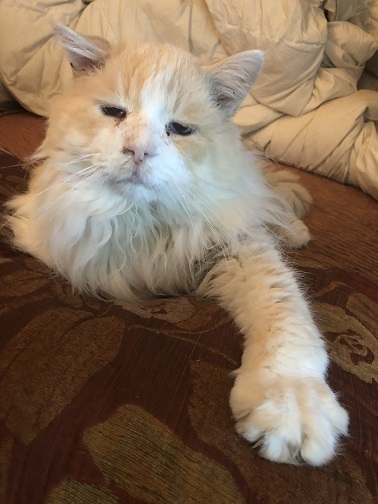 Because Pablo’s recovery was still ongoing and he was FIV+ they had a tough time finding a suitable adopter. Wayne finally decided to adopt Pablo himself.

This was partly because he didn’t want to take the chance that someone else would give up on him if things got tough, but mostly it was because he just fell in love with the little guy!

Wayne did of course have some concerns about him infecting his other cat Miles with FIV. But his fears were unwarranted, because FIV is most commonly spread through severely deep bites. This behavior is most common between two non neutered toms.

Pablo and Miles are two mellow and playful cats who get along with one another just fine and Miles remains FIV free! 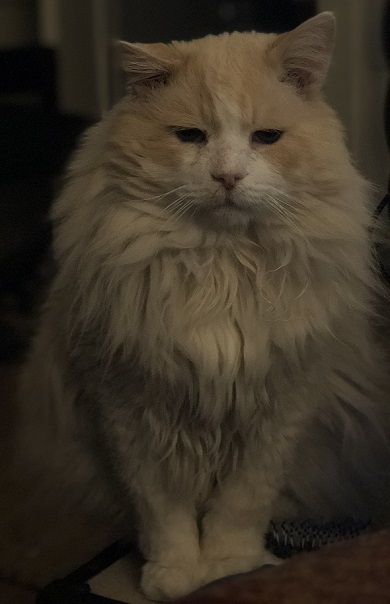 Despite all the hardship and abuse Pablo has suffered, he is still a very approachable and loving cat who is friendly to every human he meets. His progress and recovery have been remarkable.

He is a testament to the dedication and hard work that the LBACS medical team, staff and volunteers put into his recovery. And look at all his glorious fluff!

Pablo is a true survivor who has overcome a lot of obstacles to fight another day. He has been a real inspiration to myself and other members of the shelter team.

We at StuffCatsWant want to thank Wayne for submitting Pablo as Cats of the Week and for being an amazing volunteer and cat owner!