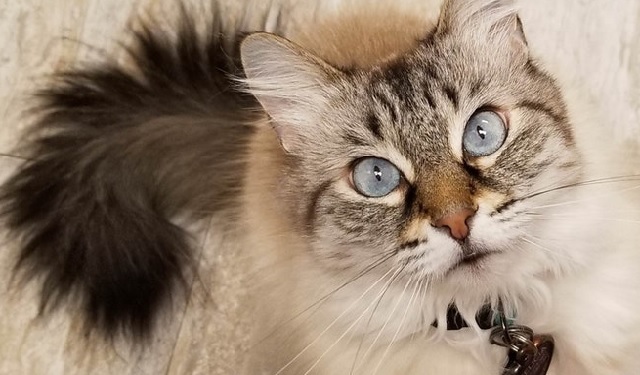 This week’s Cat Of The Week is Felicia. She comes submitted to us by Reddit User PoofMoof1 and we thank her for the submission!

In high school PoofMoof1 lived in an area with a feral cat colony and one of her neighbors had an unfixed Siamese who fathered a few litters. Baby Felicia and her mother claimed their yard but would never allow anyone to come close to them. 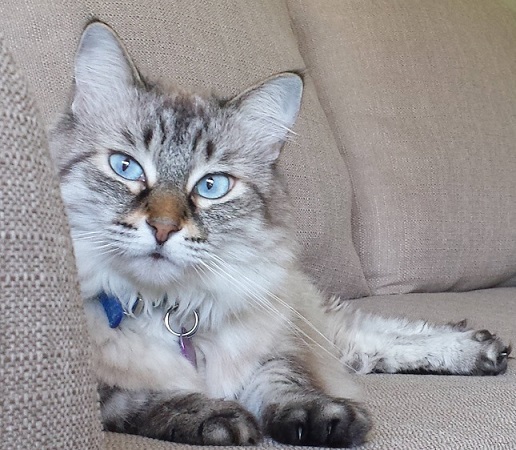 As far as PoofMoof1 knows, Felicia was the only kitten from the litter as she never saw any other kittens. Unfortunately after a few months the mother suddenly disappeared. Felicia though, now older and able to care for herself, still hung around. Felicia started getting cat food tossed her way from her human friends and as the weeks went on she allowed them to get closer and closer until petting was finally possible.

From then on they’ve been the best of friends, so much so that people joke that Felicia’s human is actually the pet rather than the other way around! Felicia did have one litter of kittens before she had gotten comfortable enough with humans to be caught and spayed. She had two adorable kittens, a brother and sister, who now have lovely homes of their own. 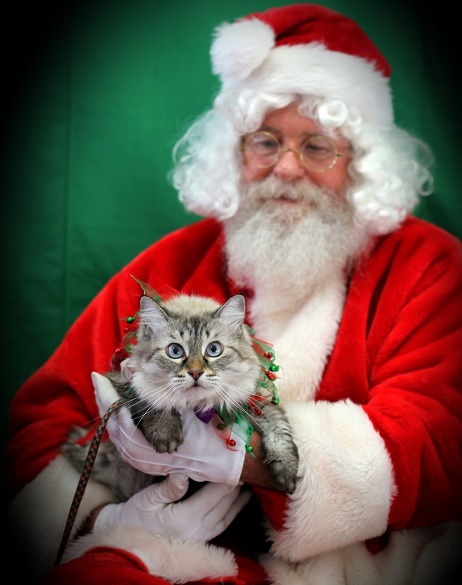 Felicia is now 7 and over the years has gone from fearful of people and aggressive toward other animals to friendly with everyone and everything she meets. It took time but you would never know where she came from because she is so outgoing now. When she gets her Christmas pictures done everyone involved is always surprised at how relaxed of a cat she is.

She loves treats and will sit, stand, and give high fives for them. Her internal clock is perfect and she’ll let her human know when it’s 9 am or 9 pm so she can get her breakfast and dinner, usually before mom has even looked at the clock! She loves wrestling with the family dog and the family’s 6 month old daughter is crazy about her. 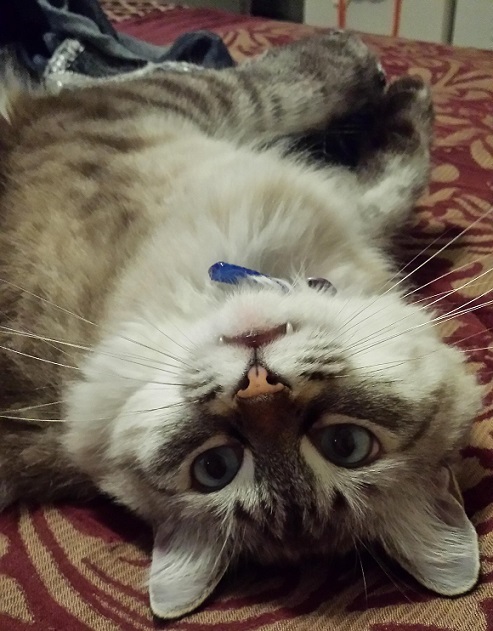 Every night she sleeps at the top of the bed on the pillows, but not before waking both her humans up up to give a few kisses. Every morning starts with purrs and more kisses as they wake up and begin the day. When their daughter takes a nap Felicia comes into the room to join in. Felicia also knows when her human friends are sick as she’ll curl up on their chests until they are feeling better.

Felicia is an indoor cat now but she still flexes her wild cat muscles chasing any bugs that dare cross her path. Her favorite game is to be chased around by her human friends or their dog. When she’s especially frisky she’ll turn around and chase back. The game always ends at her cat tower where she wraps her front paws around the post to paw at whoever is playing with her. 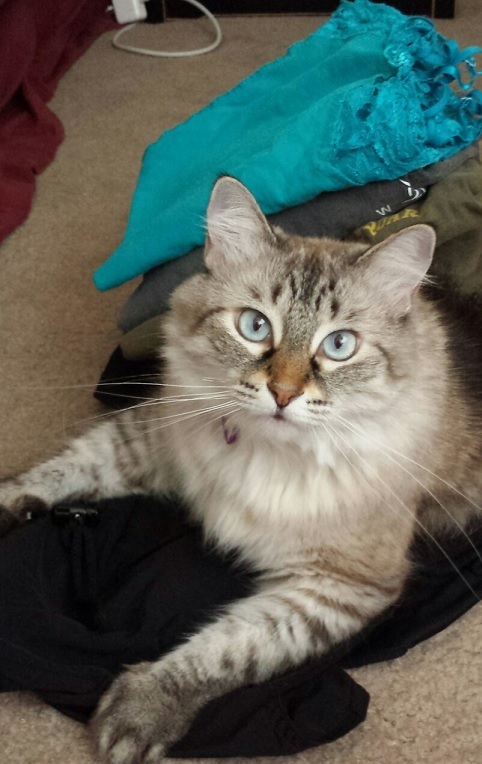 When she isn’t following her mom around she can be found relaxing in the window under the warmth of the sun or lounging on my pillow in bed. Her family absolutely adores this sweet little cat and could not ask for a better little friend. They are ever so proud to look back at how much progress she’s made and how she’s almost a different cat from 7 years ago.

What an adorable fur ball Felicia is! And quite the transition from growing up in the back yard to transitioning into such a family house cat! We thank PoofMoof1 for submitting Felicia! To submit your cat for Cat of the Week please send at least 5 photos and a description of at least 400 words to Craig@StuffCatsWant.com.