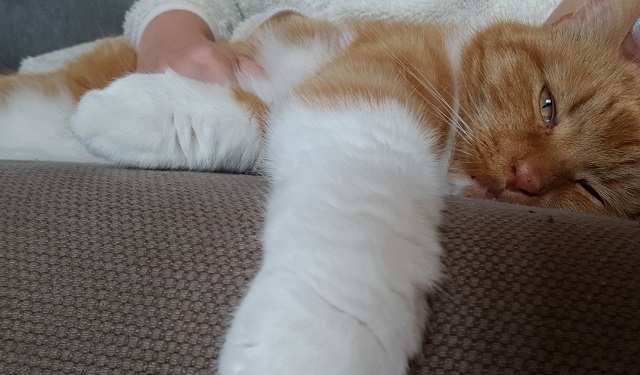 Everyone say hello to Waffles! Waffles comes submitted to us by Anne in Germany! I actually just had waffles for breakfast this morning so this post is doubly interesting to me!  Waffles is our Cat of the week for October 8th, 2018. "Waffles (his “real name” is Charlie) was born around September 2004 somewhere in Northern Germany and was adopted from a shelter by a home for senior citizens. Waffles met Ralf, one of his humans, when he started to work for the home in 2007. Anne has quite a few allergies and didn't want to adopt a cat from a shelter because she was afraid that it would cause her allergies to break out and she'd have to bring the cat back to the shelter.

I'm  so glad to see there are more and more people out there like Anne that make all these considerations before getting a pet! Kudos to you Anne! Ralf suggested instead that they bring Waffles home for a few days to test if it would work. They agreed with his boss to return Waffles to the home after a week. Waffles was so afraid during his first day with them that he hid under the bed the whole day. But when they  went to bed in the evening and the lights were turned off Waffles left his hiding place and climbed onto the bed. Waffles wasn’t allowed on the beds in the home for senior citizens he was so careful not to touch the blankets or pillows and tried to stay on the bed frame but slipped from time to time which we could feel but not see in the dark. Anne thinks this was the moment when she fell in love with him.The next day she told Ralf that he had to ask his boss if Waffles could stay because she was madly in love with him! Luckily the boss agreed and Waffles became a happy member of their household!

Waffles is generally very afraid of people and hides whenever someone visits us. Anne's mom was able to pet Waffles for the first time in 2016! But when Waffles is home with just his humans he is the loveliest and most affectionate kitty in the world.

He follow them everywhere and supervises everything they do. Because he's always checking on his humans he has earned the nickname “quality cat.” When they are eating he needs to smell everything before he stops begging for food. Reminds me of Rachel and Jun's cats and how they help in the kitchen! He loves to sit on his “lookout” on the balcony to watch birds, dogs, cats or people or to relax in the sun or to enjoy his "grass bed" on the balcony. I can relate, my cats love their window beds to watch the birds and dogs walk by! When they come home he’s running to the door to greet them and he says goodbye too! During winter he demands that his humans lift their blanket so that he's able to slip under it. Although mine don't climb under the covers, they certainly love the warmth of their own electric bed.

When they take a shower Waffles absolutely needs to be in the bathroom and when they step out he tries to clean the water off of our legs. To prove he's earned his keep he taps his humans and demands to be wrapped in the towel. Waffles loves sneaking lots of human food when they aren't looking. And if they don’t clean the plates immediately after eating he will steal all the crumbs off of the plates! Sounds like quiet the thief!

And if they leave a cake unsupervised Waffles will eat it for sure. Waffles also loves to go after spiders (the ones with the long legs) and crane flies. Sounds to me like he has quite the diverse set of taste buds! Waffles' humans love him more than words could ever describe and they are so glad he was able to come home for a visit and stay permanently!

Thank you to Anne and Ralf for submitting Waffles as cat of the week! To submit your cat for Cat of the Week please send at least 5 photos (feel free to send more!) and a description of at least 400 words to Craig@StuffCatsWant.com.